As a new series on the Schuyler Mansion blog, we will be examining some of the popular mythology associated with the 18th-century in general and with Schuyler Mansion and the people who called it home specifically. The goal for this series is not necessarily to prove the myths in question right or wrong, but to explore the possibilities - because myths are almost always rooted in fact and large parts of historical interpretation must by necessity be based in speculation. So whether you want to know where the phrase “sleep tight and don’t let the bed bugs bite” comes from, or if Alexander Hamilton is really the only founding father untainted by slavery, this is the series for you. Since this first post comes to you the day before Thanksgiving, we’ll start with some more general history- the myth of Thanksgiving! 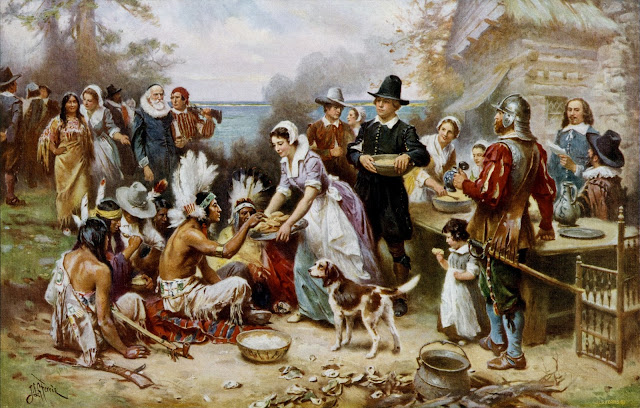 The Myth: Thanksgiving has been celebrated in this country since the time that America’s first European settlers, the Pilgrims, set aside their differences and broke bread with the Native Americans soon after settling on the continent.

The Breakdown: Was Thanksgiving celebrated by early settlers? Did it originate from a feast with Natives? Where and when did the national holiday originate?

Rather than Thanksgiving with a capital ‘T’, Puritans and other settlers did celebrate days of thanksgiving with some regularity. Days of thanksgiving were religiously organized within certain Christian communities, but in times without a separation of church and state, they might be proclaimed by a minister to his parishioners or by a governmental official to his community. Since most of the first settlements, including the separatist Pilgrims who settled near Plymouth MA, were organized around a single church and denomination, this was sometimes one and the same. 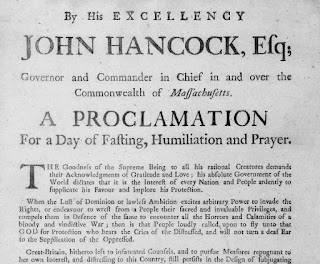 Days of thanksgiving were proclaimed when the community had reason to feel particularly blessed – after a good harvest, a period of good health and fertility, or any occurrence seen as a miracle. They were days of feasting and celebration and were proclaimed on the community and national level routinely continuing into the 18th and early 19th centuries and George Washington proclaimed several within his presidency. Throughout the colonial period, they were counterbalanced however, with days of penance, or, as this 18th-century proclamation from John Hancock reads, days of “fasting, humiliation and prayer”. As you can probably guess, these were reserved for bad times. In long periods of war, poor harvest, bad weather and other unfortunate circumstances, colonists believed they were being punished by God and needed to chastise themselves in order to bring their community back into His good graces. Very rarely was an event special enough to condone a yearly day of thanksgiving or penance.

Now, the story of the Wampanoag people helping the Pilgrims is true. The Pilgrims had not adapted well to the new land when they arrived and suffered near starvation before Tisquantum (Squanto) made contact with them and taught them how and what to hunt, fish, forage and farm. In 1621, the Wampanoag did sit down to a meal with the Pilgrims (of deer, rather than turkey), but it was six months after an agreement was forged between the two groups and nearly two years before the first day of thanksgiving was proclaimed in Plymouth – as thanks for a hard rain after a long draught.
The national holiday that we celebrate today was conceived of by Sarah Josepha Hale, the editor of Godley’s Lady’s Book who connected the “first thanksgiving” to the story of meal shared between the Pilgrims and Wampanoag. Though Hale had begun arguing for the holiday as early as the 1840s, she formally requested it of Abraham Lincoln during the Civil War and, seeing as tactically advantageous, he made the proclamation official in 1863:

“The year that is drawing towards its close, has been filled with the blessings of fruitful fields and healthful skies. [...] In the midst of a civil war of unequalled magnitude and severity, which has sometimes seemed to foreign States to invite and to provoke their aggression, peace has been preserved with all nations, order has been maintained, the laws have been respected and obeyed, and harmony has prevailed everywhere except in the theatre of military conflict […] Needful diversions of wealth and of strength from the fields of peaceful industry to the national defence[sic], have not arrested the plough, the shuttle or the ship; the axe has enlarged the borders of our settlements, and the mines, as well of iron and coal as of the precious metals, have yielded even more abundantly than heretofore. Population has steadily increased, notwithstanding the waste that has been made in the camp, the siege and the battle-field; and the country, rejoicing in the consciousness of augmented strength and vigor, is permitted to expect continuance of years with large increase of freedom. […] They are the gracious gifts of the Most High God, who, while dealing with us in anger for our sins, hath nevertheless remembered mercy. It has seemed to me fit and proper that they should be solemnly, reverently and gratefully acknowledged as with one heart and one voice by the whole American People. I do therefore invite my fellow citizens in every part of the United States, […] to set apart and observe the last Thursday of November next, as a day of Thanksgiving and Praise to our beneficent Father who dwelleth[sic] in the Heavens […]and fervently implore the interposition of the Almighty Hand to heal the wounds of the nation and to restore it as soon as may be consistent with the Divine purposes to the full enjoyment of peace, harmony, tranquillity[sic] and Union.”

Lincoln was sure to disseminate the proclamation to the Confederates, and sent additional rations to the Union soldiers, especially at the front lines where they would be seen by their opposition. He meant to show the Confederates that the Union was thriving even in the midst of war, while on the other side of the line, Confederates were desperate for supplies. The message was clear – if you were on the right side of the war, you would be feasting right now. After the war, this tradition was continued, now with families reunited after the political separation, solidifying the holiday as one of family, forgiveness and thanks.

While the true story of Thanksgiving might not be quite as romantic as the one that many of us learned in elementary school, elements of the story are certainly true. There may also be something in the colonists approach to thanksgiving worth learning – they celebrated any time there was something to be grateful for. We wish you the best this Thanksgiving, and we hope that this history inspires you to celebrate some ‘lowercase’ thanksgivings in the year to come!
Posted by Schuyler Mansion at Wednesday, November 23, 2016

Email ThisBlogThis!Share to TwitterShare to FacebookShare to Pinterest
Labels: myths